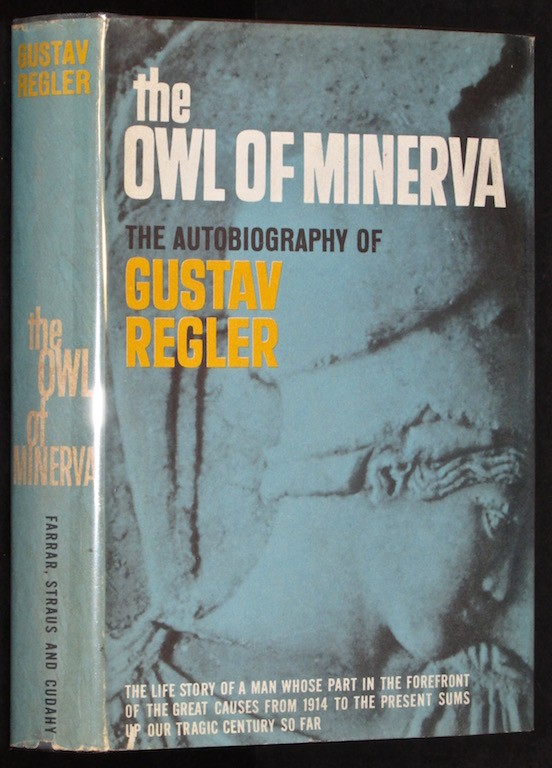 The Owl of Minerva: The Autobiography of Gustav Regler

Hardcover with DJ, Stated First Printing 1960 Farrar, Straus and Cudahy 375 pages. Very Good+, in a VG DJ. Just a hint of shelf/edge wear to blue cloth spine with white, black and yellow titles over black paper boards - corners sharp. Minor shelf/edge wear, one closed tear and dust soiling to original unclipped DJ - now in mylar. Spine of DJ is lightly faded. No previous owner markings - all pages are clean and unmarked. Gustav Regler (1898-1963) was a German writer and journalist. Regler served in the Germany Infantry during the First World War and was seriously injured. He joined the Communist Party and spent time in the USSR. He later served as political commissar of the XII International Brigade during the Spanish Civil War. Whilst in Spain he befriended Ernest Hemingway and was wounded at the Battle of Guadalajara. As a Communist, he was long-time friend of Arthur Koestler, first in Berlin, then Paris and during the Spanish Civil War. Regler's books were banned in the Third Reich. While in Spain, he wrote articles as a special correspondent for the Deutsche Zentral Zeitung. He accompanied Lillian Hellman on a visit to a Benicàssim hospital in October 1937. Regler eventually broke with the Soviet Communist Party and took refuge in Mexico where he lived the last years of his life in Tepoztlán with his second wife Margaret (Peggy). Handsome vintage copy in the original DJ. LOC SSE-03

Title: The Owl of Minerva: The Autobiography of Gustav Regler

The Owl of Minerva: The Autobiography of Gustav Regler