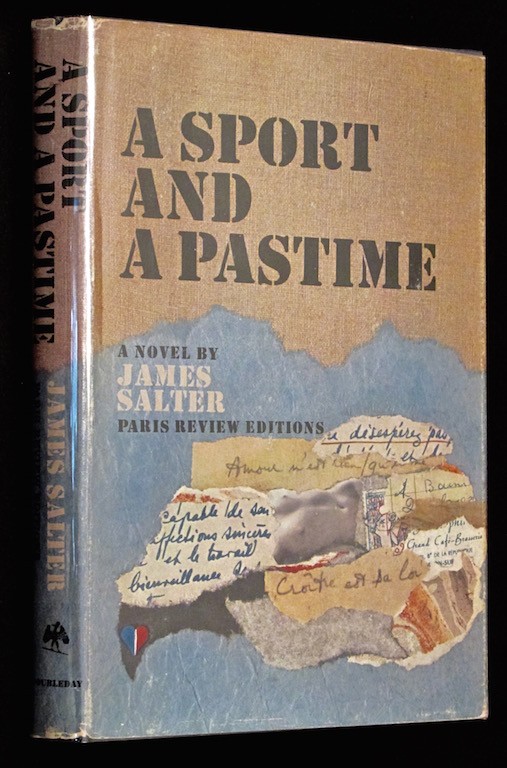 A sport and a pastime

Hardcover, First Edition 1967 Paris Review Editions 191 pages. Very Good, in a VG DJ.Just a touch of shelf/edge wear to black cloth spine with gilt titles over blue cloth boards - corners sharp. Faint foxing and edge fading to blue cloth boards. No previous owner markings - all pages are clean and unmarked. Deckled edges. Minor shelf/edge wear and dust soiling to original unclipped DJ - now in mylar. James Arnold Horowitz (June 10, 1925 ? June 19, 2015), better known as James Salter, his pen name and later-adopted legal name, was an American novelist and short-story writer. He won numerous literary awards for his works, including belated recognition of works originally criticized at the time of their publication. His friend and fellow author, the Pulitzer Prize-winner Richard Ford, went so far as to say, "It is an article of faith among readers of fiction that James Salter writes American sentences better than anybody writing today? in his Introduction to Light Years for Penguin Modern Classics. Michael Dirda of the Washington Post is reported to have said that with a single sentence, he could break one's heart. Widely regarded as one of the most artistic writers of modern American fiction, Salter was critical of his own work, having said that only his 1967 novel - A Sport and a Pastime comes close to living up to his standards. Set in post-war France, A Sport and a Pastime is a piece of erotica involving an American student and a young Frenchwoman, told as flashbacks in the present tense by an unnamed narrator who barely knows the student, also yearns for the woman, and freely admits that most of his narration is fantasy. Salter's prose shows the apparent influence of both Ernest Hemingway and Henry Miller, but in interviews with his biographer, William Dowie, Salter states that he was most influenced by André Gide and Thomas Wolfe. This book is the author?s third novel and also the second book published by Paris Review Editions.A very handsome vintage copy in the original unclipped DJ. LOC FB-01

Title: A sport and a pastime

A sport and a pastime