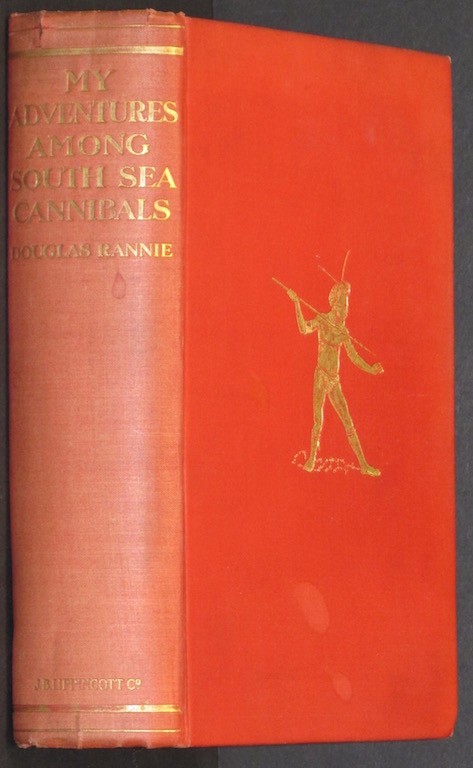 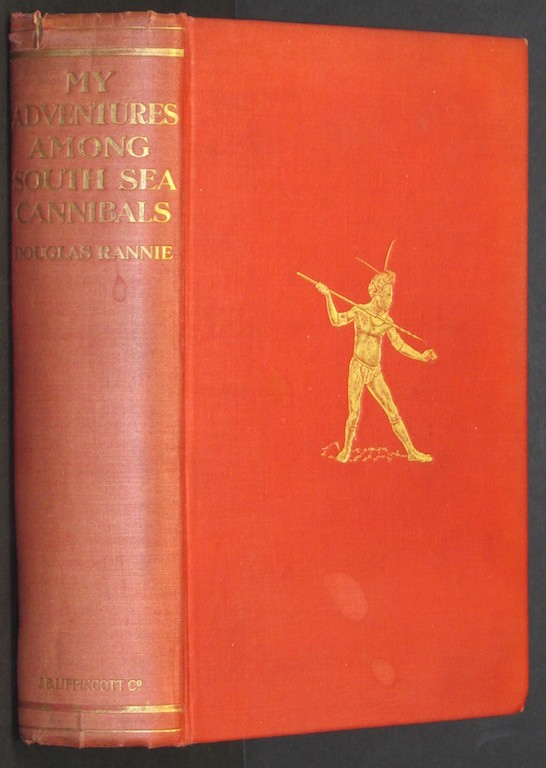 My Adventures Among South Sea Cannibals: An Account of the Experiences and Adventures of a Government Official Among the Natives of Oceania

Hardcover with fold-out color map, First American Edition 1912 J. B. Lippincott 314 pages. Good, lacking the DJ. Moderate shelf/edge wear to Red cloth boards with gilt titles and accents - corners lightly bumped, spine is sunned/faded and has two small tears at the head,front panel has two small spots. TEG. A touch of foxing to textblock edges. Previous owner bookplate on inside front cover - no writing, all pages are clean and crisp with a touch of age-toning to edges. Some scattered foxing to a few pages. Rear inside cover has an antique bookstore label from Bretano?s in New York. Binding solid. From a review at the time of publication - Douglas Rannie was for more than nine years a government agent for Queensland, and it is some of his adventures and experiences in that work which are presented here. The islands of the South Seas have long been the subject of romance; every period of their known history has been full of fascination and of terror. The story of early travel and discovery among them, the story of missionary effort, the Story of exploitation, the story of colonization?each of these has seemed to be almost an incredible tale. But there has never yet come from the Island World a more interesting, more dreadful, more bloody, yet truer, story than this narrative. Horrors have been perpetrated on Melanesians, Malaysians, Polynesians, by whites, anxious to secure laborers. The horrors of that trade in contract labor have been told again and again, but the appreciation of them has never fully come into general consciousness. To the credit of Queensland it should be said that she early made a stand against the cruelty and injustice of the system. On her recruiting vessels there was always a government agent, who, in case of need, outranked the captain, and whose approval was necessary in the case of each recruit. Douglas Rannie was such a government agent, and it is his experience in recruiting and returning laborers which is here recounted. His voyages were usually to the islands of the New Hebrides group, sometimes to the Solomon Islands and New Caledonia. The populations of these groups are island blacks, true Melanesians, notable cannibals, and among the most interesting peoples on the globe. Mr. Rannie's book makes no pretense of being a treatise on ethnography, but it abounds in precise and important items of ethnographic fact. Your reviewer is rarely unstinted in his praise; he rarely comes upon a book which he can so heartily commend. Curiously enough, it was the report of the horrible killing of a faithful government agent by natives that led Rannie to go to Queensland and enter the Contract Labor Service. That was almost thirty years ago, and there have been great changes in the Island World since then. But it will be strange if this startling and interesting story does not lead some young men to cast their lot in that old region of romance. The charm remains, and there is still novelty and interest, danger and excitement in Melanesia for anyone who goes there bent on any line of legitimate occupation. With 39 illustrations and a fold-out color map. Highly recommended. LOC SSE-02

Title: My Adventures Among South Sea Cannibals: An Account of the Experiences and Adventures of a Government Official Among the Natives of Oceania

My Adventures Among South Sea Cannibals: An Account of the Experiences and Adventures of a Government Official Among the Natives of Oceania