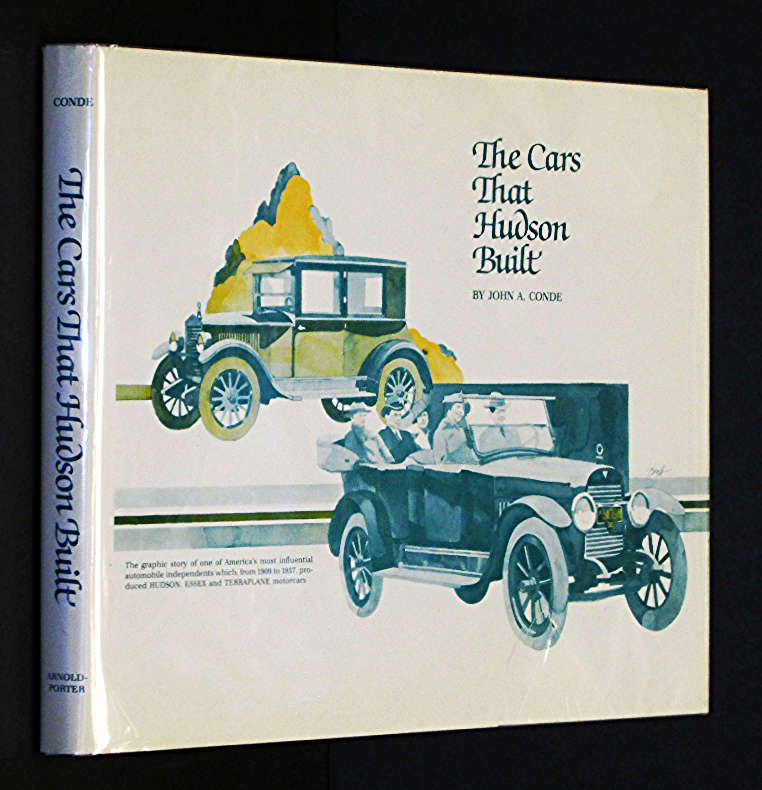 The cars that Hudson built

By: Conde, John A

Hardcover-Signed by the Author Stated First Edition 1980 Arnold Porter Publishing Keego Harbor, MI 211 pages..Near Fine in a VG DJ..just a touch of shelf/edge wear to green cloth boards with silver titles-corners sharp..minor shelf/edge wear and a touch of toning to DJ edges, front panel has a closed tear with many creases surrounding it that have been straightened out, DJ now in mylar..This is the True First edition by Arnold-Porter Publishing, not the later printing by Motorbooks, although both books share the same ISBN-096050480X. 713 vintage B&W photographs (all but 10 are "factory" pictures) and an engaging text tell the story of the Hudson Motor Car Company..The name "Hudson" came from Joseph L. Hudson, a Detroit department store entrepreneur and founder of Hudson's department store, who provided the necessary capital and gave permission for the company to be named after him. A total of eight Detroit businessmen formed the company on February 20, 1909, to produce an automobile which would sell for less than US$1,000 (equivalent to approximately $26,248 in today's funds). One of the chief "car men" and organizer of the company was Roy D. Chapin, Sr., a young executive who had worked with Ransom E. Olds. (Chapin's son, Roy Jr., would later be president of Hudson-Nash descendant American Motors Corp. in the 1960s). Warm gift inscription from the Author to Jim Quinlan. One of the Founding fathers of the Meadow Brook CONCOURS Dâ??ELEGANCE in 1979, Jim Quinlan is a well known classic car enthusiast. A very nice association copy of a great automobile book despite the flaw in the DJ..Scarce true First. LOC SS-TS-1

Title: The cars that Hudson built

The cars that Hudson built